You are here: Home / West Bridgford / ‘Britain’s Bravest’ drink coasters to be sold in Morrisons Gamston from 9 September 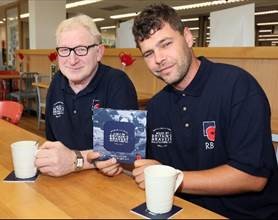 Injured ex-servicemen at Royal British Legion Industries have joined forces with Morrisons to make and sell drink coasters – to raise crucial funds for Britain’s most vulnerable veterans. They are now on sale in Morrisons Gamston, with all profits going to support wounded, injured and sick ex-servicemen and women.

The coasters come in packs of four at £4 each and will be on sale from 9 September. They feature the emblem of the factory where veterans produce road and rail signage, wooden products such as pallets, and provide printing and mailing services.

Veterans have been producing the coasters at RBLI’s social enterprise Britain’s Bravest Manufacturing Company (BBMC). BBMC is a not-for-profit enterprise which employs more than 100 people, 70% of whom are veterans, have a disability, or both.

The coaster project comes after the charitable arm of the supermarket chain; the Morrisons Foundation, supported RBLI in the delivery of their national employment ‘Lifeworks’ course for veterans, before then donating almost £300,000 towards specially-adapted apartments for injured veterans.

Steve Sherry CMG OBE, chief executive of Royal British Legion Industries, said: “Employment is truly vital for veterans who have had a difficult transition to civilian life, whether that’s due to severe physical injury or mental health issues such as post-traumatic stress disorder. This is far more than just a coaster. It is providing worthwhile employment for some of Britain’s bravest veterans who face significant daily challenges as a result of making the upmost sacrifice for the country. We are proud to have taken our exciting first step into the supermarket space with Morrisons.”

Former Welsh Guard Steve Hammond was left permanently injured when serving on the Sir Galahad when it was attacked by Argentine bombers during the Falklands War. The BBMC team leader oversees a group of veterans who have been working on the project. He said: “When I left the forces, I had nothing. I just had a suitcase in my hand and got on a train back to my hometown. That’s where RBLI stepped in, they organised for me to see a surgeon to help with my injuries, gave me a house for my family, then there was a job for me when I fully recovered. It’s been a real pleasure to work on an exciting project like this. I know the veterans cannot wait to see them in-store.”

RBLI was established in 1919 to provide support to sick and wounded troops returning from the front lines of the First World War. One hundred years on, the charity supports injured veterans and people with disabilities by providing employment and homes in their village. This year, the charity launched a £14 million Centenary Village appeal, which will see the development of 22 apartments, each designed to be fully accessible and house single veterans in urgent need, alongside 16 new family homes, and a further 24 assisted-living apartments. At the heart of the development will be a state-of-the-art community centre with an accessible gym. It will sit alongside the existing village, care homes and manufacturing facility.