You are here: Home / Your Local Motors / The DS 7 Crossback 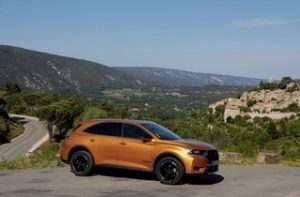 The DS 7 Crossback is the first DS to be conceived from the outset as a car to be sold under the relatively new standalone DS brand. Previous DS models, such as the DS3, were either sold as Citroens, or were marketed under the new ‘DS’ brand, but were still based on a Citroen model.

Launched to the public at the Geneva Motor Show in March 2017, and described by the manufacturers as a ‘sophisticated luxury SUV’, the DS 7 Crossback has clearly been designed to be different. Just a quick glance inside is enough to confirm that it provides a truly out-of-the-ordinary look as regards the car’s interior.

Climb in and take your seat behind the wheel and it’s obvious that this is a wonderfully idiosyncratic design. Some unusual features, such as the window switches being located on the central tunnel, do take a bit of getting used to, so a period of adjustment is to be expected, but once acclimatised, the “contemporary boutique” layout actually seems to work quite well.

The interior has an air of distinction, which those looking for something a bit different are bound to appreciate, and it’s easy to settle into the car and watch the miles roll by.

The unfolding/retractable B.R.M. clock with its unusual numbering is a bit of fun while if you want to light up the overhead interior lights all you need do is put a finger near them: neat, unusual, and very convenient.

The Rivoli trim of the test car had a striking cuboid theme, but other interior options allow for similarly striking appearances and personalisation.

The front seats have adjustable thigh support and the backs of the rear seats recline electrically- another unusual feature. These are both relatively simple but effective steps that can help increase comfort.

From the outside the assertive front styling turns heads so the designers have certainly made their mark and the high bonnet and light cluster slots give something of an Evoque look to the DS.

There are plenty of engines to choose from and the most powerful option is the 225PS petrol engine. This is only available with automatic transmission and it starts at around £36,000 on the road, compared to under £28,000 for an entry-level DS 7.

Moving down the range, 180PS and 130PS options are available with either diesel or petrol power. The 180, like the 225, is auto only; the 130PS petrol is manual only; and the 130 diesel is available in both manual and automatic forms.

Driving a 180PS petrol-engined model, the average after a week’s driving was around 41mpg – a commendable effort, but the diesel 180 might be expected to return around 50mpg.