You are here: Home / Archives for VJ Day 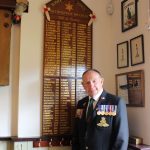 Rushcliffe Borough Council is joining commemorations for the 75th anniversary of VJ Day and the end of World War Two. Whilst VE Day marked the end of the war in Europe in May 1945, many thousands of Armed Forces personnel were still engaged in bitter fighting in the Far East.  Victory … END_OF_DOCUMENT_TOKEN_TO_BE_REPLACED