You are here: Home / Archives for Oaktree Avenue 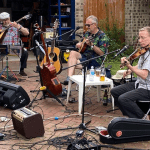 A group of neighbours in Radcliffe on Trent put on a distanced street gig which raised £550 in donations for Nottinghamshire Hospice. Norman Randall, who plays guitar and Irish bouzouki as well as singing in Nottingham folk band Higgs Bo’sun, had the idea of putting on an event for charity … END_OF_DOCUMENT_TOKEN_TO_BE_REPLACED