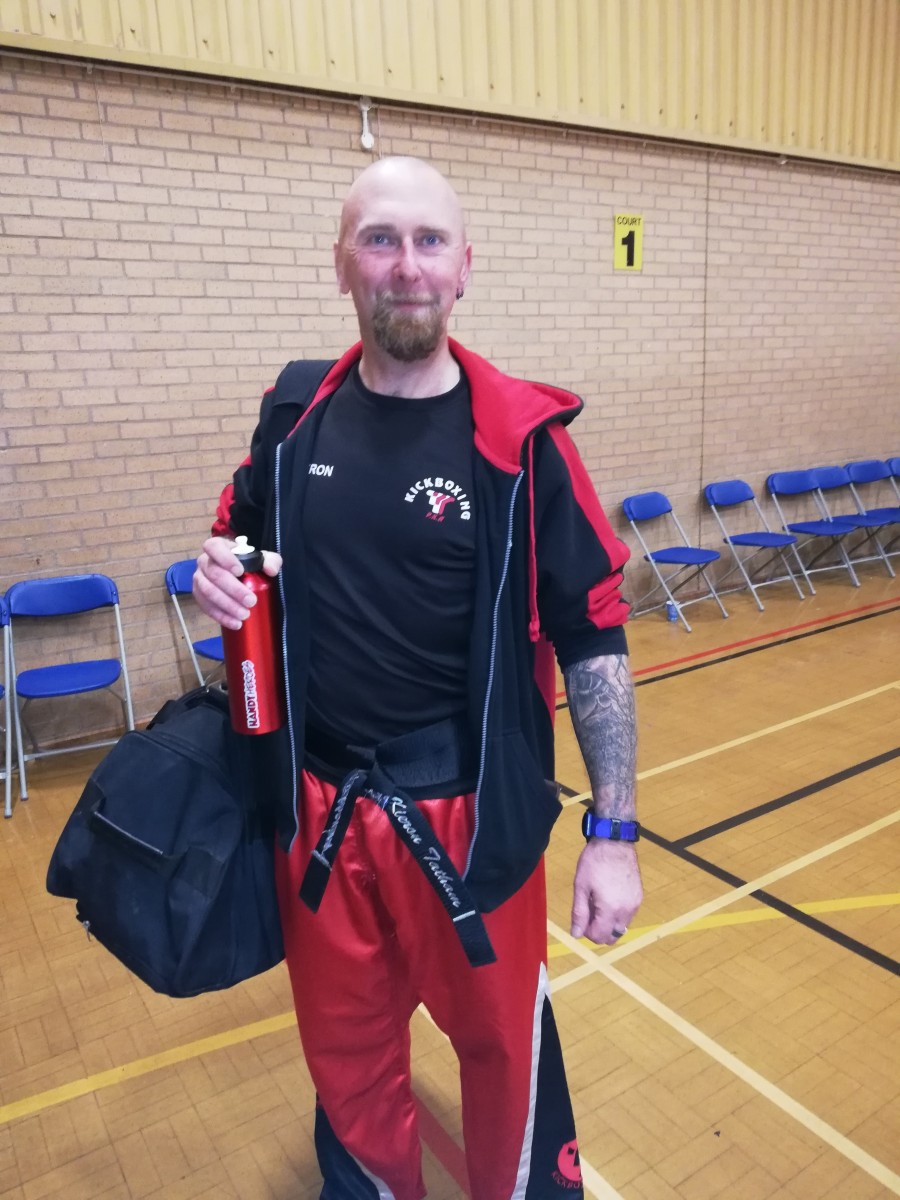 Kieron Tatham 47 from Gotham Nottinghamshire, a life long keen martial artist who has been training with PKA Kickboxing in Clifton since January 2012.

Whilst training for his Brown belt in February 2017 he found a lump in his throat and got the dreaded news after having a biopsy that it was cancerous and needed to be operated on.

Kieron was in the lucky few as his Parotid Gland Cancer was caught early and was treatable but as anyone currently battling Cancer or surviving it in the past he knew the treatment and recovery would have a lasting impact on all aspects of his life.

He continued to train until July 2017 when the operation to remove his Parotid Gland was scheduled and then he began an intensive course of post operation radiotherapy to ensure the Cancer was fully gone.

At this point his Brown Belt training and goal of achieving his Black Belt seemed far from his reach and even regaining his once high level of fitness seemed a pipe dream.

However in April 2018 Kieron made his first cautious trip back to training.

Kieron said ‘I just couldn’t think that far ahead to pick up again for my black belt but really wanted to get back to training, I contacted Coach Martin and we discussed a return to training plan and the club made a number of adaptions for me to accommodate the impact of training with the damage to my saliva glands. I was soon back training a few times a week and feeling mentally and physically stronger’

‘After 6 months back at training Coach Martin helped me to focus on some medium term achievable goals, including taking the Coaching Exam and taking my Brown Belt before the end of 2018’

I was delighted to achieve both and all of a sudden my goal of a Black Belt was back in the picture we started to train for the October 2019 exam. He added ‘Those next 12months were tough, the Coaches pushed me past my limits week in week out. Then the date came to Travel to Birmingham and the Professional Kickboxing Association (PKA) head office to take the 3 hour exam. I was proud to come out of the session with only having to have 2 more drink breaks than the others in the room (some of which were half my age), which when you have no ability to produce saliva felt like a massive achievement on its own.

At the start of November Kieron got the news he was hoping for with a letter from the Principle of the PKA that he had passed his Black Belt exam with flying colours and was presented with his Kickboxing Black Belt.

Martin Byrne Clifton Club coach said ‘The Black Belt is the pinnacle of any Martial Art and an achievement that the vast majority of people will never reach.   For Kieron to face such adversity on his journey and to bounce back stronger and more determined than before is a credit to his character and an inspiration to us all’ he added ‘I’ve seen first hand the training sessions where quitting was by far the easier option but Kieron tackled every challenge with a smile on his face and a determination to not just beat Cancer but to give it a kick in the face on the way!!!’

Kieron’s daughter has now also joined the Kickboxing club and is busy training for her Green Belt. Kieron is also planning to open his own club in the next 12months so he can help coach others in the future.