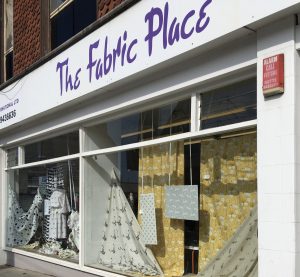 My Fabric Place was born in 1969 when fabric entrepreneur Hisham Abukalum successfully started selling and exporting premium wool and tweed fabrics to the Middle East, from where he originates. Initially trading from small premises in Nottingham, business was lucrative. However, exportation became difficult after the Civil War in Jordon broke out and in order to survive the business had to re-assess where to sell goods.

Based in Beeston, it was decided to try the market locally to see if the demand for fabrics was as fruitful as it had proved abroad and thankfully it was. Since then, My Fabric Place has been a market leader for selling fabrics from their doorstep in the Midlands to major department stores such as John Lewis and House of Fraser – all over the world. It has successfully built a reputation as a friendly, family run business at the heart of the local community, providing great customer service at competitive prices.

During its 50 years, the business has had a number of different branches including Nottingham’s City Centre. Currently it trades from its shop in Chilwell High Road, Chilwell, where it has been based for over 40 years, selling a wide range of fabrics for dress making, soft furnishings, and curtains.

Proud to be celebrating 50 years in business this year, My Fabric Place wanted to thank its loyal supplier and customer base from over the years. 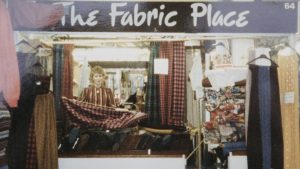 On Friday 27th September guests were invited to celebrate with sewing product demonstrations by Ex-Sewing Bee Producer Claire-Louise Hardie together with local representatives, including the Mayor of Beeston and Broxtowe MP Anna Soubry. Providing refreshments and handy sewing hints and tips to customers, the event proved to be a commemorative triumph! 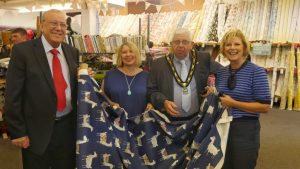 In an industry which has become fiercely competitive with online traders, My Fabric Place has survived by what they believe makes them stand out from the rest. “We are fluent in fabric and have very knowledgeable and loyal staff which we believe are the heart and soul of any small business. “ The company is progressing by expanding its social media profile presence and has recently launched its brand new, easier to use website www.myfabricplace.co.uk, broadening its customer market – selling to countries all over the world and continuing to thrive as a business!