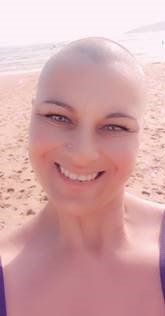 There is a commonly held misconception that bowel cancer just affects older men. This is not true. People of all ages need to be aware of the symptoms so they can be diagnosed early. Bowel cancer is the fourth most common cancer in the UK and the second biggest cancer killer, affecting both men and women. Every 15 minutes in the UK someone is diagnosed with bowel cancer. That’s almost 42,000 people every year.

Marie McGlinchey, 50, from Nottinghamshire, was diagnosed with stage 3 bowel cancer 12 months ago, which has since developed to stage 4, and wants to encourage the people of Nottinghamshire to sign up to this year’s Decembeard campaign to either take part of sponsor someone to raise money for Bowel Cancer UK.

After spending time on the allotment with her friend, Marie started to feel unwell and had an acute pain near her appendix. Having been diagnosed with peri-menopause, she dismissed it and took some painkillers. When the pain continued and she saw the doctors, it was initially treated as suspected appendicitis.

Routine surgery to remove her appendix was planned, but when she came around a few hours later, the surgeon explained she had undergone emergency open bowel surgery. 10 weeks later, the doctor was able to confirm she did have bowel cancer and would require chemotherapy.

“There was no history of this disease within the family and I hadn’t had any symptoms. At least that’s what I thought then. Looking back there were some symptoms, like being tired, headaches and anaemia but I put these down to peri-menopause, nothing else,” says Marie.

From the intense treatment that followed, Marie still suffers with the neuropathy side effects and is unable to tolerate cold food and drinks.

“Right now I take each day as it comes. I try to stay positive. I’m glad to say my good days outweigh the bad days. I aim to prove the experts wrong. In the meantime, I am working through an achievable bucket list starting with staying in a 5-star hotel in Cornwall (an early 50th birthday present and ticking off the bucket list from my amazing hubby!).”

To find out more about the symptoms of bowel cancer, visit bowelcanceruk.org.uk.

Taking part in Decembeard is really simple. All you need to do is shave on 30 November and let your facial fuzz grow throughout the month. Already bearded? No problem. Dye, ditch or decorate your beard and join the campaign.

Save lives this December. Grow a beard and raise funds to support Bowel Cancer UK’s vital services and lifesaving research:bowelcanceruk.org.uk/decembeard2019