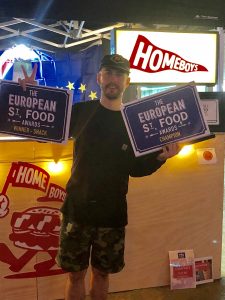 Pete Hewitt, 30, runs a local street food business under the name Homeboys, based in Nottingham Street Food Club in the Victoria Centre, Nottingham. He also trades at festivals and events in Nottingham, Derby, Birmingham, Sheffield and Leicester from his converted 1978 Chevrolet truck which is becoming well known in the area, serving freshly cooked Asian fusion style food with Pete’s trademark flavours and presentation.

Pete was born and bred in Nottingham and lives in Clifton. Graduating in graphic design from Bristol UWE, Pete was inspired by Bristol’s foodie scene. His grandfather and great-grandfather were chefs and so cooking is a family obsession. After graduating, Pete entered BBC Masterchef in 2015, working his way through to the finals.

Pete set up his Homeboys business the same year, selling his food firstly from a gazebo, then from the restored Chevy truck. Pete was invited to be a permanent part of the Nottingham Street Food Club in Victoria Centre, Nottingham when this was set up in 2016.

Encouraged by the public response to his food, Pete entered the British Street Food Awards competition run by the award-winning food journalist and broadcaster Richard Johnson and now in its 10th year. Pete was overall champion of the 2019 Midlands area heats, and competed in the national finals in London in September 2019 against winners of other regional heats, winning Best Snack category.

Last weekend (28th and 29th September) he competed for the European Street Food Awards finals in a converted warehouse near the waterfront in Malmo, Sweden against 21 other finalists from many hundreds of entrants in 15 countries. Entries were judged by Sweden’s first female Michelin Star chef Titti Qvarnstrom, the 2-Michelin Star Malmo chef Daniel Berlin and local food writer Karin Ericson.

Again, Pete won the Best Snack category but in choosing the overall winner, the judges were unanimous in picking Homeboy’s Pete Hewitt, who is now European Champion.