You are here: Home / Uncategorized / Group to Trek 100km across Sahara Desert in aid of Air Ambulance 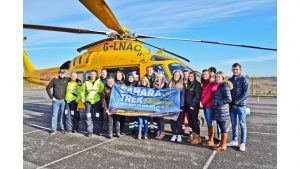 A group of 26 people from Lincolnshire and Nottinghamshire are set to endure the gruelling heat of the Sahara Desert in aid of the Lincs & Notts Air Ambulance.

The team will spend 5 days trekking through one of the world’s most inhabitable places in a bid to raise vital funds for the local Air Ambulance, helping the medical crew and helicopter to continue saving lives across Lincolnshire and Nottinghamshire.

As part of the Sahara Trek Challenge, which forms a key part of the Charity’s 25th Anniversary celebrations, the group will climb Moroccan sand dunes, sleep under the stars in tents and could face blistering temperatures of up to 33 degrees Celsius.

The team will embark on the trek where they will encounter deserted villages and deep-water wells frequented by Sahara nomads.  The group will include people from all walks of life, including married couples, groups of friends, people in their 20s and people in their late 50s and 60s.

One of those taking part is Finn Hogan, who will complete the challenge alongside his fiancée, Michelle. Finn said: “A couple of years ago, I took on an overnight 50-mile hike in Norfolk with my son Cameron and his pals… It broke us! This seemed like the perfect challenge to redeem ourselves, so myself and Cameron signed our names on the dotted line.

“Unfortunately, Cameron was unable to take part due to work commitments, so I’ve managed to rope in my ever-suffering fiancé Michelle and feel that it’s only fair we suffer the trials and tribulations of the challenge as a couple.”

During the trek, the team will climb Erg Zaher, the tallest sand dune in the area. Once at the top of the 1,900ft-high dune, which is said to be the furthest part of the desert from civilisation, participants will be encouraged to watch the sun set and reflect on why they have taken on the challenge.

On average, the crew at Lincs & Notts Air Ambulance are called out to 3 potentially life-saving missions every single day, with each mission costing approximately £2,500. Whilst all 26 trekkers have their own reasons for pushing themselves to the limit during this gruelling challenge, they have raised over an incredible £50,000 for the Charity so far, enough to fund 20 potentially life-saving missions.

Finn added: “I ride a Triumph motorbike and know that there have been more than a few call outs for unfortunate incidents on our rural roads. The Lincs & Notts Air Ambulance is something that is close to so many biker’s souls, and I felt compelled to give something back.

“Bring on the Desert! I’ve already had to promise that I won’t sell Michelle for anything less than 6 camels!”

There’s still time to make a donation. To sponsor the group for this incredible adventure, visit //www.justgiving.com/trekthesands2019