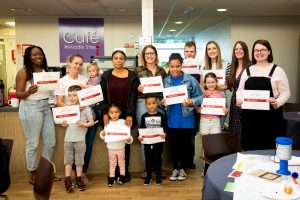 Families and food bloggers were among those who swapped their usual tasty treats for a week of basic rations to help raise funds for a Nottinghamshire homelessness charity. Broxtowe Youth Homelessness, which supports young people across the county, held a Food Parcel Challenge, asking people to live on the contents of an emergency food parcel for a week.

As well as raising funds to help support its work, the challenge was also designed to highlight the difficulties faced by the young people the charity helps and show that living on a food parcel is not as simple as some people might believe. In total, more than 20 people signed up, swapping their usual weekly shop for a list of standard food parcel items like tinned veg and pasta.

Among them was Nottingham food blogger Jeremy Putman, who usually spends his weeks dining out around the county. He shared his experience with his 9,500 Twitter followers.

“I wanted to get involved as I think it’s such an important issue, and was keen to do something to raise awareness of the increasing number of people relying on food parcels,” he said.

“The hardest things for me were the lack of choice and the lack of nutritious food. There was also a much smaller amount of food than I would usually eat in a week! The support from people on Twitter and friends was great and their donations really motivated me to complete the challenge.”

The challenge was also supported by several local families whose children joined them in their efforts. Emma Peters, of Stapleford, took part along with her six-year-old son Bradley.

“I work in the Citizens Advice Bureau in Beeston which is where I saw the advert for the challenge, and I just thought it would be a really good thing to get involved in.

“It’s helped Bradley understand what some other children have to go through and how lucky he is. I think the hardest part for him was the lack of snacks and not being able to go and help himself to things from the cupboard.

“There were times where I was hungry but I wanted to make sure that Bradley got enough food. It made me realise what some parents must go through – literally having to choose whether you or your children eat. I feel like I will definitely be able to empathise more with some of the people I help at work.”

Bradley said: “I was quite hungry a lot, but I enjoyed doing it. I missed cake and pizza.”

“I felt really tired and unhealthy by the end of the week, as you don’t feel like you’re eating anything that’s very good for you.

“Sophie did amazingly. Our week included a children’s birthday party, which I made the cake for, and she couldn’t have any of that or any other treats. She did so well to stick to the challenge.

“It’s been really good at making us both realise what we take for granted and how lucky we are.”

Broxtowe Youth Homelessness, which helps young people aged 16-25, has seen a huge increase in demand for its services recently, with the number of young people coming to them for help more than doubling in the last two years – up from 88 in 2017/18 to 182 in 2018/19.

Jessica Brannan, project manager, said: “We’re so grateful for all the support we received during the week. Everyone’s done amazingly well and it’s been great to hear their stories.

“It’s not an easy challenge, but that’s exactly why we chose it. We wanted to show people that food parcels are not the ‘easy option’. Living on one is hard and not something anyone would do out of choice.

“Our fundraisers can all go back to the food they used to enjoy before, but that’s not the case for the young people we help. This is the reality of their everyday lives and it’s great that the challenge has helped to shine a light on some of the difficulties they face.”

For more information on the charity and to make a donation in support of those who completed the challenge see www.broxtoweyouthhomeless.org.uk