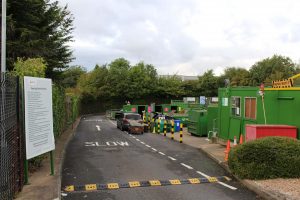 An unregistered waste carrier has been fined for dumping items he had been paid to take away outside West Bridgford’s Recycling Centre after it had closed. Rushcliffe Borough Council prosecuted Peter Robinson, 51, from Clifton, for leaving a mattress and a bag of general waste outside the Rugby Road facility at 6pm on January 14 this year after accepting cash to dispose of the household items.

He pleaded guilty to a single count of contravening the Environmental Protection Act 1990 at Nottingham Magistrates’ Court on October 4. A Ford Transit van linked with the incident was located, seized and destroyed by the authority prior to the prosecution, in line with its powers.

He was spotted by vigilant members of the public dumping the items who contacted the site’s waste operator Veolia.

Rushcliffe Borough Council’s Cabinet Portfolio Holder for Environment and Safety Cllr Rob Inglis said: “The message is clear, we will wherever possible prosecute those who flout the rules and don’t take responsibility to dispose of waste legally.

“This was reckless by Mr Robinson, leaving items outside the gates of the facility, thinking this was not a problem and when it was clearly signed that recycling centres do not accept commercial waste.

“Always check anyone you pay to take items away from your home is a registered waste carrier by requesting to view the appropriate Environment Agency licence.”

Robinson was left with a bill of £540 to pay at the court, including a £400 fine, £100 costs and a £40 surcharge with magistrates taking into account his guilty plea and income support status.