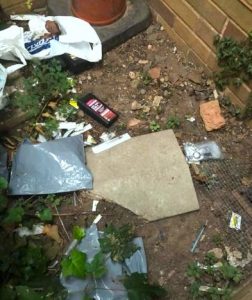 Used and dirty needles were found by a Clifton mum who speaks of her disgust and anger as she found them dumped outside a church, an area where children often play. 40-year-old Elizabeth Arnold discovered the used needles on Thursday 12th September. They were left on the ground outside the Clifton Methodist Church, just off Southchurch Drive.

“The issue has been going on for quite a while now, at least the last few months” She commented.

Elizabeth runs the 44th Nottingham Boy’s Brigade along with her husband at the Clifton church, providing activities for young boys aged 5 – 17 years.

She said “This is an area where a lot of children come. We have the Boys’ Brigade which we run on Fridays from the church and there is also a parent and toddler group on a Wednesday there.”

The mum is both fearful and angry that a child may run off from their parent and innocently pick up a needle unaware of the danger, leaving the child at risk of infection.

“We have a lady who is coming to clear them away with a sharps box, but it’s not nice to see. It is dangerous and scary for both children and parents.

“The council have been informed about it, but I don’t know what can be done. There is an actual box where the needles can be disposed of at the church, but they aren’t using it.

There are currently future plans for the church to undergo refurbishment which will hopefully stop access to the area where the needles were found.

A Nottingham City Council spokesperson said: “It’s disappointing to find drug paraphernalia discarded in Nottingham. We carry out regular patrols and, where possible, investigate so that action can be taken against those responsible.

“Members of the public can report this to us by calling 0115 915 2000 and we will respond promptly. On private land like a church, we would work in partnership with the landowners and the police to tackle the issue.

“The Council commissions a pharmacy which provides needle exchange in Clifton, as well as other locations across the City.”

Nottinghamshire Police advise that anyone who discovers used needles should contact their relevant council.