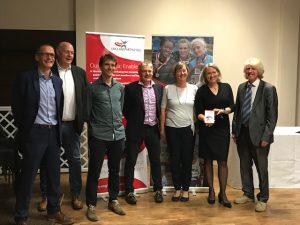 Bingham-based Rushcliffe Athletics Club won the Club of the Year award for the East Midlands at the 2019 England Athletics Regional Volunteer Awards last night. Matthew Edwards, Graham Moffatt, Danny McIntyre, David Sweet, Kathryn Mellor and Caitlin Sorrell, were presented with their award at a special awards night, held at Leicestershire Cricket Club, to celebrate and reward volunteers who have made outstanding contributions to athletics and running in the East Midlands.

Rushcliffe Athletics Club says: “At Rushcliffe, success is also measured in smiles. Our club ethos is – give it a go”.

CLUB OF THE YEAR AWARD FOR THE EAST MIDLANDS

Rushcliffe AC: RAC is a thriving club of 500 members, with half under the age of 15, plus 24 coaches and 7 officials. With ages ranging from 8-74, RAC competes successfully in a range of competitions across the year: Mini League Cross Country (3rd overall), Mini League Sports Hall (3rd overall), Mini League Track and Field (currently 2nd), at the 2019 National Cross Country Relays, RAC fielded at least one team in every single category bar U20, in our 1st season in the North of England League, RAC currently sits an impressive 4th out of 8. The club also competes in the local Cross Country and Summer Leagues. At the 2019 Notts County Track & Field Championships, RAC won a total of 97 medals, and several of the club’s younger members are now receiving national recognition.

Beyond the club’s success in competition in 2019, RAC has made huge strides in reaching out into our community with a Couch to 5k programme, cerebral palsy race running, guide running for visually impaired athletes and runners and an after school coaching club.

This year, RAC achieved success across the board, with many of our athletes performing strongly at County and National level. However, success on the track isn’t the only measure of a club, and RAC believes in inclusion for the whole family and for all levels of ability. We’re proud of the success of our athletes, but success can be defined in many ways, by winning medals and representative honours, but it can also be found in Couch to 5K graduates pulling on their vest and running further than ever before to represent their club. It can be found in the young coaches taking their first steps on the coaching ladder and using those skills to help athletes with cerebral palsy participate in the sport we love. It’s the guide runners helping visually impaired athletes and runners achieve their goals. It’s the joy on the faces of kids and adults alike at one of our famous races, throws or jumps nights where all members are encouraged to compete, regardless of age or ability. At RAC, success is most certainly also measured in smiles.

England Athletics is hosting a total of nine regional awards across England this year throughout September and early October. Every winner of a Regional Volunteer Award is then put forward to an external panel who will select the finalists for the prestigious National Volunteer Awards.

The finalists will then be invited to attend the England Athletics National Volunteer Awards & Hall of Fame Ceremony hosted on Saturday 12 October at the Hilton Birmingham Metropole. The event will not only honour volunteers from across England but will also induct some of the stars of athletics and running into the England Athletics Hall of Fame. Since its launch in 2008, Hall of Fame inductees have included Sir Roger Bannister, Lord Sebastian Coe, Paula Radcliffe MBE and Dame Jessica Ennis-Hill. A limited number of tickets @£55 per head including dinner are available for the National Volunteer Awards by emailing kbem@englandathletics.org. More information on the event is available on https://www.englandathletics.org/about-us/hall-of-fame/.

Chris Jones, CEO of England Athletics, said: “Our sport of athletics and running is built on the selfless and invaluable contribution that our amazing volunteers make. It’s fantastic that, through our Regional Volunteer Awards, we can put our volunteers in the spotlight and reward the fantastic work that they do week in, week out. We hope that the stories of our award winners and nominees can also inspire other people to get involved in our great sport.”