You are here: Home / Your Local Motors / Subaru XV 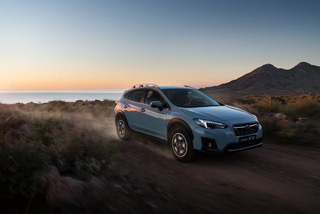 Compact crossovers are commonly based on existing hatchbacks. The result is a car with a higher driving position and a more rugged appearance, but it is basically designed for use on Tarmac. This approach appeals to many buyers and recent years have seen a substantial growth in this market sector.

Typically these crossovers either have front wheel drive, or an “on demand” four wheel drive system, where part of the engine’s output is sent to the rear wheels when the car’s electronics detect the need.

Subaru take a different approach, one which has served them well for many years. Subaru earned their reputation by building well-engineered and dependable cars with full-time four wheel drive and – disregarding the overtly sporty BRZ – this is the approach Subaru still takes.

Consequently, rather than their crossover being based on an everyday hatchback or estate, Subaru use a platform that was designed from the ground up to incorporate four wheel drive. So with the XV, you know you’re not only buying a car that looks like it should perform off road, you’re buying a car that actually could cope with challenging conditions.

Subaru’s other distinctive feature is their flat-four ‘Boxer’ engine, which the manufacturer says gives their cars a lower centre of gravity and a “more balanced weight distribution”. The current XV also stands out from the crowd by only being offered with ‘Lineartronic’ CVT automatic transmission, and by there not being a diesel option.

All versions of the XV incorporate Subaru’s ‘Eyesight’ system which uses dual cameras to detect other vehicles, motorbikes, bicycles and pedestrians. When a potential hazard is identified, EyeSight warns the driver and can apply the brakes if necessary, to help avoid a collision. This system is also designed to protect drivers who park facing an obstacle, then accidentally set off in drive rather then reverse!

There are two engine options, two-litre or 1.6-litre, offering 156 and 114 PS respectively. The larger engine offers significantly stronger acceleration, cutting the 0-60 mph sprint by about three seconds, compared to its smaller sibling. The two-litre, for an extra £1,200, will therefore be the preferred choice of those who are looking for performance, particularly as it also comes with 18-inch wheels, rather than 17-inch, and with paddle shift.

All versions are well-equipped, with LED headlights, hill descent control, rear cross traffic alert, a reversing camera and keyless entry with push-button start. If you want even more, for an extra £2,000 the ‘Premium’ version adds leather upholstery, a sunroof, an electrically-adjustable driver’s seat and satnav.