You are here: Home / Your Local Motors / ALPINE A110 WINS ‘BEST PERFORMANCE CAR’ AT THE UK CAR OF THE YEAR AWARDS 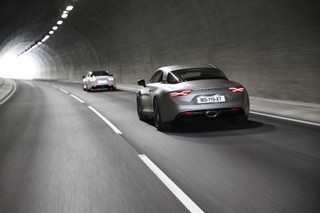 UK Car of the Year judges have confirmed to Motor Martin recently how they have awarded the impressive Alpine A110 the title of ‘Best Performance Car’ And that this latest accolade joins a host of coveted award wins that have been presented to Alpine for its A110 in the past 12 months. Not only that but this award also sits alongside the A110’s inclusion in the seven-car shortlist for the overall European Car of the Year 2019 award and that can’t be bad can it?

The judging panel have explained how they were impressed by the cohesion of the Alpine A110 package. In particular, the lightweight design was credited for delivering an exciting driving experience.

Judge Alex Grant said: “There’s an art to reviving brands and heritage models with new technology, and the A110 hits the mark perfectly. Chic, lightweight and surprisingly compact, it’s rightly put Alpine back on the wish lists of enthusiasts across the UK. This is a classic in the making.”

Sébastien Erphelin, Managing Director, Alpine said: “It’s fantastic for the Alpine A110 to be recognised in this way by the UK Car of the Year jurors. To continue to receive such strong recognition for the qualities of the A110 in the UK and across Europe gives the whole team a tremendous amount of satisfaction.”

And that’s not the only good news for the all -new Alpine A110 as this latest accolade caps a successful 12 months for this driver-focused sports car as it has also been awarded multiple coveted titles in the UK and across the world:

According to Alpine, the A110 is available in two trims; A110 Pure encapsulates the driver-focused spirit of the original Berlinette, whilst the A110 Légende has more of a touring character with sophisticated interior materials and six-way adjustable comfort seats. The A110 is priced from £46,905 and is available to order now and that, in Motor Martin’s opinion is somewhat of a bargain for such a car.

To arrange a test drive or for more information on a new Alpine A110 please contact Tim Jones at Alpine Centre Solihull on 07784 229 825 or email timothy.jones@solihull.alpinecars.com