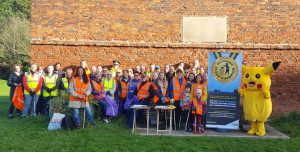 On the 9th October the NG11 Clean Champions joined with Highways England for another incredible and successful collaborative event, cleaning up the Clifton A453 and beyond with Poppies!

Yet again with the sun on our backs, 45 wonderful NG11 Clean Champions plus 7 fantastic junior litter champions, including a visiting Pikachu (from Pokémon) set out to clear litter from NG11.

And how fitting, Highways England have sown poppies along the grass bank between Crusader island and Garrett Grove; a tribute for this part of the A453 – Remembrance Way – named in honour of 453 British service personnel killed in combat in Afghanistan, including Clifton’s own Kieron Hill.

A big thank you to all that took part, including:

All the lovely volunteers

Karen Connors – assisting and keeping me on track!

Tesco Express: Muffins for all

McDonalds and Harvester pub: Coffee for all

Teamwork at its best – until the next time! Love NG11 – Let’s keep it clean!