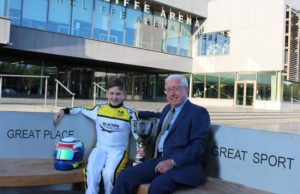 Will Orton, 15 from Keyworth, is now the 2019 SuperOne British Junior ROK karting champion after securing pole position in six out of eight time qualifying sessions and winning 11 out of 16 races.

Cllr Gordon Moore, Rushcliffe Borough Council’s Cabinet Portfolio Holder for Finance, met Will to congratulate him on his recent achievement and to wish him good luck in the upcoming 2019 ROK world finals which take place in Lonato in Italy.
Cllr Moore said: “It’s amazing to see great young talent in Rushcliffe and we were delighted to award Will funding through our Elite Sports Grant scheme.
“He is also part of our Free Access to National Sportspeople scheme which provides free access to our leisure facilities to sportspeople competing at a higher level.
“We would like to wish Will the best of luck in his upcoming race in Italy where he will be among 400 competitors, travelling from over 54 countries!”
Will’s mum, Liz Orton, said: “We were so pleased that Rushcliffe Borough Council awarded Will funding which has contributed towards his coaching and travel costs.
“There is no national supported programme for karting and the amount of practice days he is able to do is directly proportionate to the amount of funding we receive, so schemes such as this are really helpful.
“Will hopes to further his career in motorsport by stepping up into car racing later this year, competing in the last round of the 2019 Junior Saloon Car Championship and also looking forward to podium results next year.”