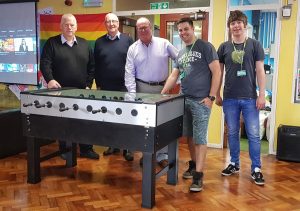 Volunteer groups in Keyworth and the Wolds have been awarded funding from Rushcliffe Borough Council’s Community Support Scheme assisting a Young People’s Centre and local Women’s Institute Group with much needed investment for projects. Cabinet members Cllrs Rob Inglis and Andy Edyvean and Cllr John Cottee, all ward councillors for the local area, each selected funding towards the Keyworth Young People’s Centre and Willoughby-on-the-Wolds Women’s Institute.

The Centre were able to purchase a new football table and games console, that were amongst the most wanted items by users and the WI were assisted with the cost of a day trip to the national learning centre in Oxfordshire. Chris Seager, Youth Worker at the centre thanked the councillors for their support and funding, enabling them to buy new equipment that will assist further social and recreational activities for local young people.

He said: “Through the fund raising efforts of the young people here and a partnership with our local councillors we were able to raise enough money to buy the new equipment for the centre.

“It has been a really great project from start to finish with a wide range of the young people getting involved.

“Because it’s something that has been chosen by them, they have a real sense of achievement and success from their efforts and hard work.

“Thanks again to councillors Inglis, Edyvean and Cottee for their support with this project!”

The Chair of the WI Christine Hull described the support as “fabulous”.

She said: “We were so grateful to receive a Community Grant funding from our three Borough Councillors.

“We could finally arrange this trip which had been previously financially restrictive for some of our members.

“We all had a truly fantastic day and we cannot thank them all enough.”

“In the Youth Centre’s case, we were delighted to provide a joint contribution from our Community Grant funds to ensure they could make the purchases.

“If any there are any other projects within our Ward that need a funding contribution we ask groups to contact us at www.rushcliffe.gov.uk.”

Cllr Edyvean added: “We were pleased we could make the difference to one of our local WI’s that enabled them to visit their college and enjoy an informative day.

“They certainly deserve something back for all their voluntary and fundraising work in the community.”

Cllr Cottee said: “We know how vital funding can be to local groups so they can pursue their activities that increase people getting out and about and active in their local communities.

“It’s great to hear feedback that the groups really value the contributions we were able to make.”

The Community Support Scheme allocates £1000 to each Councillor to spend in their ward for the benefit of their community.

Individuals or community groups in Rushcliffe that may benefit from the scheme can contact their local Councillor or read more here: https://bit.ly/2OIRSGD