You are here: Home / Rushcliffe / Candleby Lane schoolchildren experience lessons in the wonders of the Universe 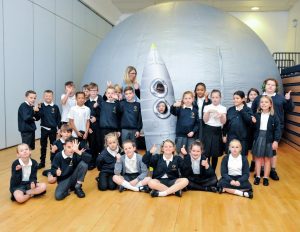 Children at Cotgrave Candleby Lane School have been exploring the wonders of the universe at school with the help of a visiting astrophysicist.

The lessons were given inside a special dome where images of space were projected, giving children an immersive experience.

Astronomer and Astrophysicist, Irina Vladimirova visited the school to help children to understand more about the universe and said, “Sharing knowledge about the stars, planets and space with children of this age is important, after all, they are our future space explorers!”

Irina says that children’s natural curiosity is inspiring. “Hearing that children are very interested is the reason we do this job. It is especially important to be a role model, and in my own case particularly so for girls. I may not look like their idea of a scientist and I do still come across girls who ask if it’s possible for a girl to be a scientist, or if a girl can really go into space- they just don’t believe it’s possible!

“I think of all of the planets, Venus is my favourite and I would definitely like do this again if I could. It’s been really interesting!”