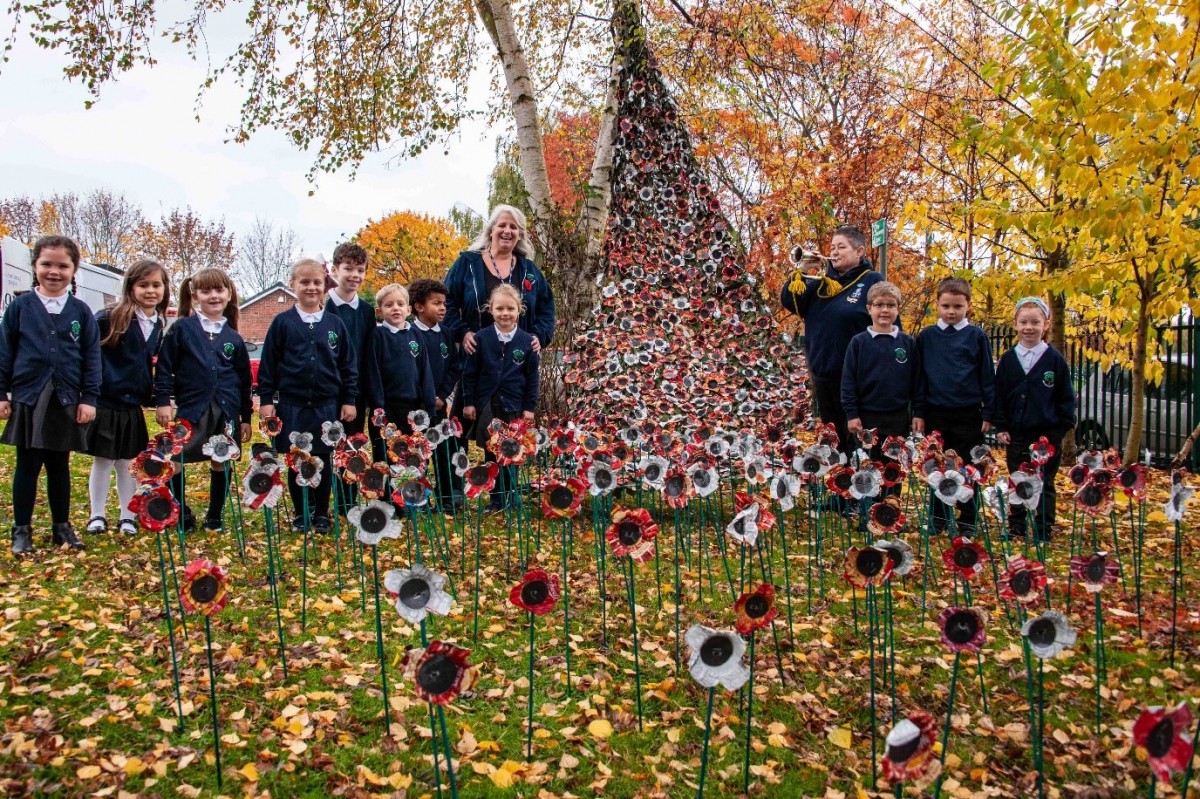 Children at Alderman Pounder Infant & Nursery School in Chilwell have been preparing for their annual Remembrance service with yet another spectacular display of over 500 poppies dedicated to those who have lost their lives in the line of duty.

This year the school have used recycled crisp packets to create a wonderful cascade of poppies in their playground, with every child in school assembling their own unique version.

The petals of the poppies were prepared by staff, in large part, by Family Support Worker, Mrs Linda Hibbert who said she was helped by her husband in the mammoth task. 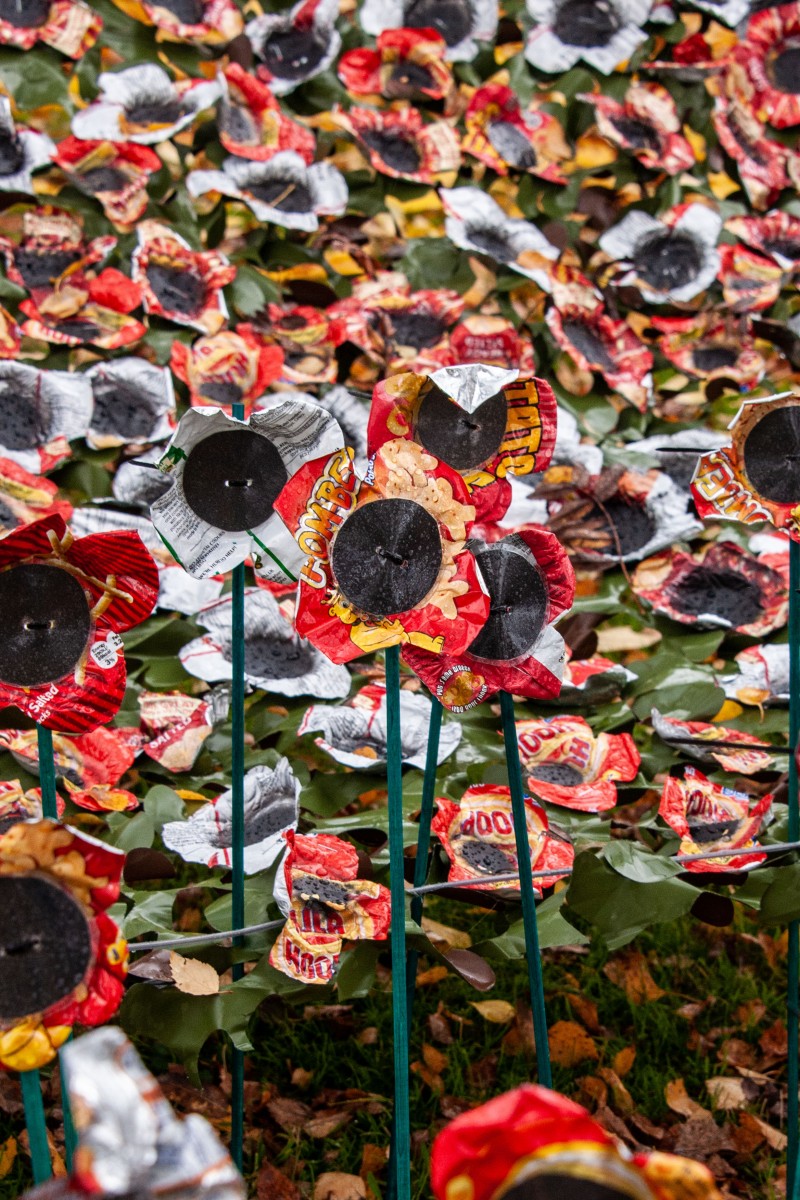 The ingenious method of cutting then moulding the red crisp packets onto baking trays, before hardening them in a warm oven for about a minute was inspired, she said, by a childhood trick of making badges. “We are an Eco-school and wanted to use recycled materials this year and create a memorable display as a focal point of the service. We think the display looks great and everyone in school has played their part in creating it.”

When Walkers Crisps heard about Alderman Pounder’s efforts, they even sent along two boxes of crisps to add to the unique display!

Pupil Isabella Oldham, age 6, said she thought it worked brilliantly. “We used crisp packets and straws and made a poppy each. They were quite easy and fun to make. I think the poppies look amazing!”

Head Teacher, Julie Hemsley, said that some children within school are from military families, adding a personal aspect to this important part of their school calendar. “We always prepare the children with a special assembly to talk about the meaning of our Remembrance Service. For many in our community it holds personal meaning, but for the whole school, the children and the staff alike, it is a way of joining with our local community to remember and give thanks for the courage and sacrifice others have made, and continue to make, on our behalf.”

The school even boasts its own expert Bugle player who has performed the Last Post and Reveille in front of full stadiums at the National Ice Centre, Nottingham, as well as performing each year with Beeston’s Boys and Girls Brigade Bands at the Remembrance Parade in Beeston town centre.

Mrs Kay Sullivan said she gets no more nervous in front of a stadium audience, than performing the duty in front of Alderman Pounder’s school children! She said, “Following the minute silence in school I will play the Last Post which I think is a very moving piece.

“It is quite a nerve-wracking thing to do, whether it is performing in front of a stadium or in front of the assembled school! But we hope that it makes it a memorable service for everyone taking part.” 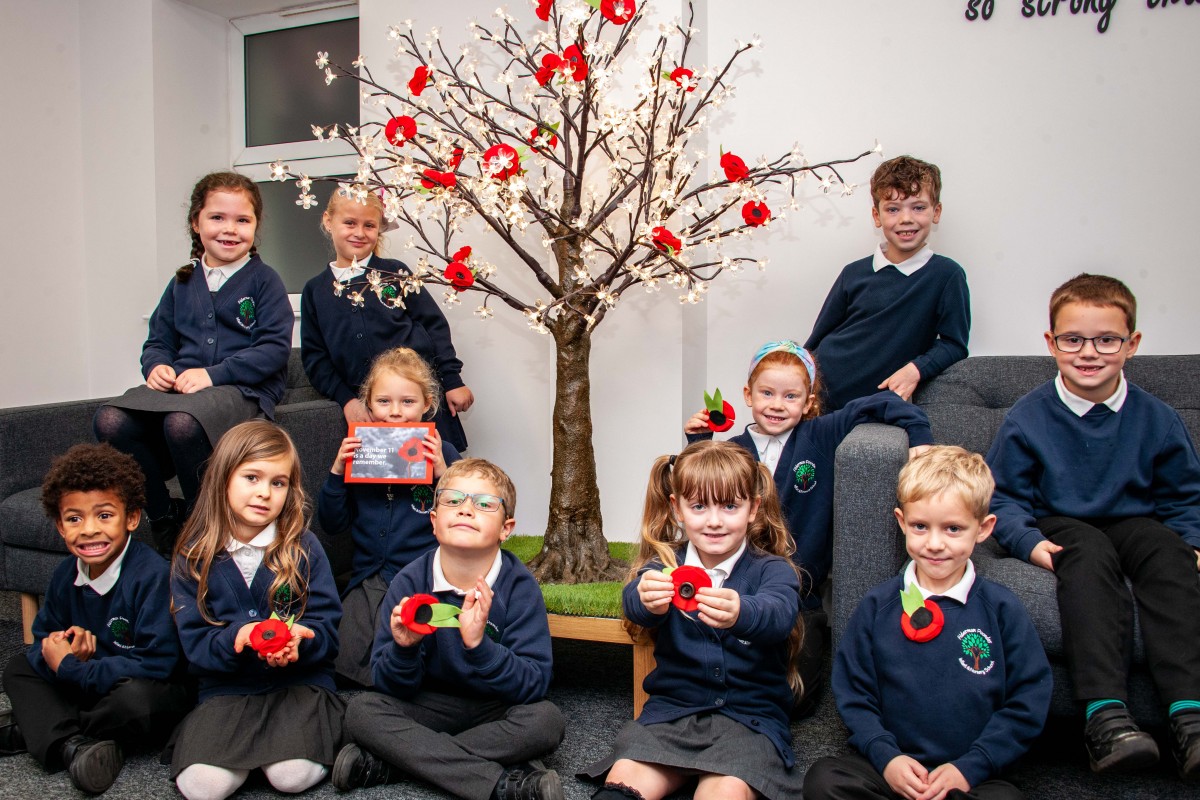 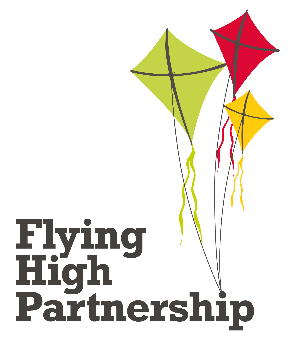